Imagine having a facelift carried out under local anaesthetic while you are wide awake.

Here, Frances Carter, a former nursing auxiliary from Bournemouth, describes her operation, and her surgeon explains how it was done. 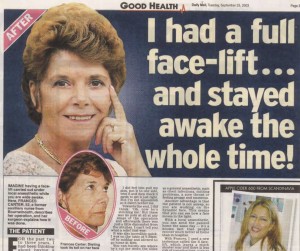 For the past two to three years, I had been thinking about having a face-lift because I was unhappy with the way I looked.

Three years ago, I went on a diet and dropped from a size 14 to a size eight in just three months, losing two stone in the process. Although I was delighted to be slim, the diet took its toll on my face. Every time I put on make-up, I could see huge bags under my eyes. It felt as if there wasn’t much room to put eye shadow on my eyelids, my chin had dropped and there were creases at the side of my face. But even though I desperately wanted a face and eye lift, I was too scared to consider a general anaesthetic.

I have never had an operation before and I was concerned that being a life-long smoker – I had only just given up – would affect my recovery. But I changed my mind when I saw a TV programme about the plastic surgeon Azhar Aslam who carries out the procedures under local anaesthetic. I know this wouldn’t appeal to many people but it was the answer to my prayers. It turned out to be the best money I’d ever spent.

After tracking down Mr Aslam to his clinic Linia in Harley Street, I made an appointment. He explained the procedure and we set a date for the operation.

The evening before the facelift I took arnica tablets to help prevent bruising. I was so nervous that I hardly slept that night, even though I was exhausted after catching the 6am train to London.

But as soon as I got on the operating table, all the stress evaporated. I thought: ‘I’m here now – finally I’m going to look different.’

First, I was given a pain relief tablet, then I had a sedative injection in my hand and the local anaesthetic was administered. The needle going in was the only thing I felt throughout the whole operation, but even that was just a pressure rather than acute pain.

I knew Mr Aslam was doing my eyes first, but I didn’t feel him cutting into me. I just felt him touching my skin very lightly. After my eyes, he concentrated on the rest of my face, lifting the muscles in my cheeks then stitching it back up. You think it’s the skin that droops but actually it’s the muscles underneath.

Mr Aslam talked me through each stage and explained what he was doing. That definitely helped to make me feel more in control of the procedure. He told me that if I felt anything I should tell him and he would top up the local anaesthetic. I had two top-ups during the procedure but was not in pain at any point. I did feel him pull my skin, put it to one side, trim it and then check it again to get it just right. But I’m not squeamish so it didn’t bother me.

Towards the end, I did think: ‘Oh, now he’s stitching me.’ But there was no pain at all at any stage of the operation and afterwards there was just a little discomfort from the stitches. I can’t tell you what a relief that was.

It was also incredibly quick. I was on the table at 9.30am, off by midday and allowed to go home by 4pm.

You can hardly see where he’s cut me down the sides of my face – my chin is now completely smooth – and you can’t see the stitches on my eyes at all. When he had finished Mr Aslam let me look in a mirror while I was still in the operating theatre: you could see straight away what a brilliant job he had done.

The other bonus was that it didn’t take any time to recover. I had the face-lift on a Tuesday and I went out shopping on the Friday wearing sunglasses. All you could see was a little bit of tape holding the stitches. I had no bruises on my face whatsoever; just two little red lines coming down from the side of my nose. I was given antibiotic cream to rub on the scars, and after I had the stitches out I rubbed in Vitamin E cream.

Everyone has said how natural it looks. My husband Eric thinks I look a lot better too, and has finally admitted that the operation was a good idea. People tell me how brave I am, but I would have been far more nervous if I had gone under a general anaesthetic.

Mr Azhar Aslam is a plastic surgeon in Harley Street. He says:

I like using only a local anaesthetic when possible as it doesn’t carry the same risks as a general anaesthetic, such as chest infections, clotting problems, a sore throat or feeling groggy and nauseous.

Another advantage is that the patient is not asleep, so you are working on the dynamic face. This means that you can see how a face moves in the light.

With a local anaesthetic, you can send the patient home the same day – it’s a known fact that people recover much better at home than in hospital.

With Frances, I used a new technique called the S-Facelift, which leaves a much shorter scar and there is less risk of complications, such as damaging the facial nerves.

Also, you get more natural results – it’s almost impossible to create the ‘wind tunnel look’, for example, when the face looks as if it has been stretched back too tightly.

The ‘S’ technique is most suitable for women who are relatively young and so don’t have the heavy jowls or crepey neck.

Like any face-lift, with this technique you excise and tighten the skin, the structures and lines of the skin, the cheeks, jowls and neck.

But the beauty of the technique is that you don’t have to make big cuts to do the neck separately – it can be incorporated within the same incision.

First, I took out the bags from Frances’ upper eyelids followed by the lower eyelids.

Then I did the face-lift itself. That entailed excising the skin, tightening the muscles and lifting up the skin.

The operation takes two-and-a-half hours and it’s pretty routine. I do anything from five to 12 a month. My patients can be any age: I have done face-lifts on women as young as their late 30’s and as old as their 70’s.