Emma fancied a few nips and tucks to get back her pre-pregnancy body. And she wanted to keep a close eye on it all, too…

Latex-gloved hands moved toward my breasts. They were clutching a glinting scalpel in their powdery, pale fingers. I couldn’t take my eyes of the blade.

‘Are you comfortable?’ the owner of the fingers asked me, and I nodded. Then he drew the scalpel along the underside of my left breast… 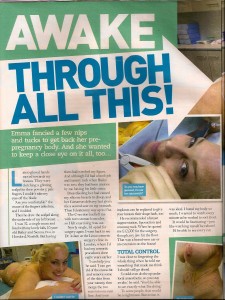 I was 32, a single mum and lived with my lovey kids, 10-year-old Bailey and Sienna, two, in Horsford, Norfolk. But having them wrecked my figure. And although I’d had a boob job and tummy tick when Bailey was two, they had been undone by me having his little sister.

Breastfeeding her caused my silicone breast to droop, and her Caesarean delivery had given me a second scar on my stomach. Then I’d eaten my way up to 13st. The C-section had left me with torn stomach muscles, so I felt exercising was out.

Newly single, I’d opted for surgery again. I went back to Mr Aslam at Linia Cosmetic Surgery clinic in London, where I’d had my cosmetic procedures done eight years earlier.

‘I can help you,’ he said. ‘I can get rid of the excess fat and remove some of the skin from your tummy, then merge the two scars into one neat line. And your implants can be replaced to give your breasts their shape back, too.’

He recommended a breast augmentation, liposuction and a tummy tuck. When he quoted me £12,000 for the surgery though, my jaw it the floor. That was a brand-new car or an extension on the house!

I was close to forgetting the whole thing when he told me something that made me think I should still go ahead. ‘I could do the op under local anaesthetic, so you stay awake,’ he said. ‘You’d be able to see exactly what I’m doing.’

To some people, that would be a nightmare. But to me, it was ideal. I hated my body so much, I wanted to watch every minute as he worked to sort it out. It would be fascinating- just like watching myself be reborn! I’d be able to see every cut and stitch and if it wasn’t quite what I wanted, I could tell them. It would be like going for a haircut.

The temptation of being awake and having that control over my body was too much to resist. I wasn’t at all squeamish and Mr Aslam said that without a general anaesthetic, I would recover more quickly and the risk of side effects would be far lower, too.

‘You should go for it,’ my sister, Sophie, said, when I told her: ‘You deserve it.’ So I dipped into my savings again, borrowed the rest of the money from friends and family, and booked myself in for the op.

A few weeks later, Sophie took me to the clinic and waited while I went into the operating theatre. Mr Aslam made the first incision, and I watched him pull out the silicone implant and my breast collapsed like an empty balloon. I laughed and then watched him stuff a new one in, giving me back the perkiness I’d been missing.

‘Would you like a break?’ he asked, as soon as he’d done the other one. I got up and walked to the loo, then popped into the waiting room for a glass of water with Sophie, before going back for more surgery. As I lay back, I watched him slice open my abdomen from hip to hip and pull up a curtain of skin.

A liposuction tube was slurping away and I saw a thick, porridge-like substance filling a plastic cylinder by the bed. ‘That’s fat,’ Mr Aslam said, and I cringed. Then he cut away my excess tummy skin and sewed me up. I could feel every movement, but there was no pain at all. With every drop of fat I saw removed, and every nip and tuck, I felt better.

‘Are you happy with that?’ Mr Aslam asked when he’d finished. He could have been a hairdresser showing me the back of my head in the mirror. ‘Perfect,’ I said. An hour later, after devouring a prawn sarnie and a cup of tea, I was in a taxi home.

I rested up for a couple of days, but I was soon back on my feet. And by the time I went back to have the dressings removed 10 days later, I was almost healed. Six months on, I’m more body confident than ever, I love my new 34F breasts and flat tum and feel like I’ve never been pregnant. People think I’m mad when I tell them that I watched every moment of the four-and-a-half-hour op. But I’d struggled with my body for so long, I guess I just wanted to keep an eye on things!