Torment of the Toyboy

For as far as the eye could see, there were tables piled high with cakes of all shapes and sizes, pretty bouquets of roses and lilies, and yards and yards of white silk and satin.

My boyfriend Dean and I weren’t even engaged, but as we strolled around the wedding fair we found ourselves making plans.

‘We could get married on a beach,’ Dean said.

‘Just you, me and the sunshine,’ Dean added.

By the time we got home that evening, we had the whole thing planned out. A week later, we’d bought each other promise rings to wear as a sign of our commitment. I couldn’t have been happier. But one night, as we were curled up on the sofa together, Dean said something that worried me.

He asked: ‘Are you sure we won’t be able to have children?’

I almost choked on my cup of tea. 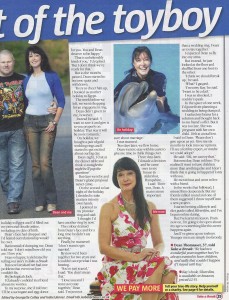 There was a pause and then Dean said: ‘Oh well, having a family isn’t everything.’

I hoped he meant it. Although Dean and I looked the same age, he was 35 while I was 54. My child-bearing days were well and truly behind me. In fact, I was old enough to be Dean’s mother.

We’d met through friends and thanks to a £5,000 face-lift at Linia Cosmetic Surgery, I’d been able to keep our 19-year age gap a secret from Dean for quite a while. He’d only found out the truth when we booked a holiday to Egypt and I’d filled out my personal details online, including my date of birth.

Dean’s face had dropped and I’d feared our relationship would be over. But instead of dumping me, Dean told me: ‘I don’t mind how old you are. I love you.’

I was so happy, I celebrated by telling our story in Take a Break. But now I realised we had one problem that even true love couldn’t fix. My biological clock. I’d already confided in a friend about my worries. To my surprise, she’d told me: ‘I’ll be a surrogate and egg donor for you. You and Dean deserve to be happy.’

‘That is unbelievably kind of you,’ I’d replied. ‘But I don’t think we’re ready for that.’

But as the months passed, Dean started to become quiet and withdrawn. To try to cheer him up, I booked us another holiday to Egypt. The week before we left, we went shopping for an engagement ring. Dean didn’t give it to me, however.

Instead he said: ‘I want to save it and give it to you properly on holiday. That way it will be more romantic.’

On holiday, we bought a pair of gold wedding rings and I started to get excited about our big day. Every night, I’d sit at the dinner table and think: “Is tonight the night he’ll pop the question?”

But days went by and Dean’s grand proposal never came. On the second to last night of the holiday, I decided to take matters into my own hands. I pointed to my promise ring and said: ‘I thought I’d have another ring by now.’

The colour drained from Dean’s face and for a long time he didn’t say anything.

Finally, he muttered: ‘I don’t want to get married.’

By now we’d been together for two years and I couldn’t accept what I was hearing.

‘I love you and I want us to stay together,’ Dean said. ‘I’m just not sure about marriage.’

I was stunned. Two days later, we flew home. Dean went to stay with his aunt to give me time to think things over. Three days later, I’d made a decision and he came over to my house in Aldershot, Hampshire.

I said: ‘I love you, Dean. A man is more important than a wedding ring. I want us to stay together.’

I expected Dean to fly into my arms. But instead, he just looked at the floor and shuffled from one foot to the other.

‘I think we should break up,’ he said.

I was so shocked I couldn’t speak. In the space of one week, I’d gone from planning a wedding to being dumped. I racked my brain for a solution and thought back to my friend’s offer. But it was too late. She was pregnant with her own child. I felt at a total loss.

I said to Dean: ‘Please don’t give up on us yet. Give me six months to look into our options. I’ll see a fertility expert, or maybe we could adopt?’

But next day, Dean told me: ‘I’ve realised I want to have children more than anything else and I don’t think this is going to happen if I stay with you.’

He moved out and went to live with a friend. In the weeks that followed, I missed him desperately. But my friends rallied round and one of them suggested I throw myself into a new project.

I started writing a lifestyle and diet guide called Silverslim and I’ve begun online dating. But I’ve learned my lesson. From now on, I’m going to be open about my age so something like this never happens again. And I’ve given up on toyboys. Younger men are simply too broody.