The Best Thing I’ve Ever Done

Victoria Buglioni had been thinking about having implants since she was 16, and finally went ahead last year at the age of 25. She told her Harley Street surgeon, Mr Azhar Aslam, that she wanted to go from a 34B to a 34DD. Her operation cost about £4000, paid in three instalments. Victoria, an accounts assistant and part-time model from Enfield, London, explains: 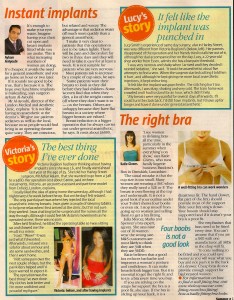 “I really liked the idea of going home the same day, although I had nightmares the week before the op. But on the day I felt relaxed.

The only painful part was when they injected the local anaesthetic into my breasts. I was given a couple of sleeping tablets to help me relax when I first arrived at the clinic, but I’m not sure they worked. I was chatting to the surgeon and the nurses all the way through. Although I could feel Mr Aslam’s movements as he operated on me, there was no pain.

After he’d finished, he tilted the operating table so I was sitting up and showed me the result in a mirror. I said: “Wow!” It was just what I’d wanted. Afterwards, I relaxed on a sofa for about an hour and ate some sandwiches, and then I went home.

I felt some pain over the next couple of days, but the painkillers helped and I’d been warned to expect it. The operation was the best thing I’ve ever done. My clothes look better and I’m more confident and proud of my figure.”