The ‘What Baby’ Job

After giving birth to three children, Amanda McMurtrie, 30, opted for a tummy tuck and breast augmentation.

‘Before I fell pregnant I was always relatively happy with my body. I’d wear whatever I wanted to – bikinis, tight dresses, nothing was off limits. Although I always put on at least a stone during pregnancies, I usually managed to lose it again.

However, after my third baby, my already naturally large DD breasts drooped and I was left with an awful apron of loose skin that hung from my stomach. I tried exercises to tone up but nothing helped. My confidence plummeted; I was 28 but felt that I had the body of someone so much older.

The turning point came one day when I was shopping with my sister. We were trying on outfits for an upcoming party and nothing fit me. My breasts were so flat that I couldn’t fill any of the dresses, and it was my sister who finally suggested surgery – an idea I’d been considering privately for weeks. After talking it through with my partner, I booked a consultation within days.

On the day of the surgery, I was really nervous as I’d ever been under a general anaesthetic before. But when I emerged from theatre and looked down at my new breasts, I felt as though a weight had been lifted from me. My breasts had been lifted and increased to a 34F, but as I was big busted this wasn’t a dramatic change. 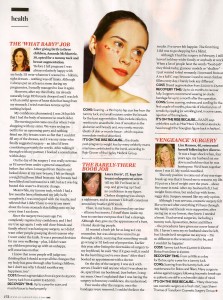 Meanwhile, my tummy tuck, which I had a few months later, eliminated my jelly belly completely. I was overjoyed with the results, and relieved that I didn’t have to worry any more about the loose stomach skin falling onto my lap every time I sat down.

Since the surgery two years ago, I’ve completely regained my confidence, and I feel my true age again. I only told close friends and family when I was having my surgery, as I didn’t want other people gossiping about reasons why I went under the knife. It was a personal decision for my own wellbeing – plus, I didn’t want my children growing up with an unhappy, self-conscious mother.

I know that some people will judge me, thinking that I should accept all the changes that my body has gone through after having children, but I don’t see why I should sacrifice my happiness, too.’

RECOVERY TIME: Up to a year for scars and muscle tissue to heal properly.


CONS: Scarring – a thin hip-to-hip scar line from tummy tuck, and small incisions under the breasts for the bust augmentation. Risks include infection, reactions to anaesthetic, loss of sensation in the abdomen and breasts and, very rarely, necrosis (death of skin or muscle tissue – which requires immediate medical attention).


IT’S ON THE RISE BECAUSE… the drastic post-pregnancy weight loss by many celebrity mums may have contributed to the trend, according to Rajiv Grover of the Harley Medical Group.