Lula’s living with a death sentence- so why was she worrying about her breasts rather than the risk of dying?

All around me, on one of the hottest days of the year, women were wearing low-cut tops and strappy summer dresses. Yet here I was, sweltering in a black, baggy jumper to cover up my tiny, flat-chested frame. At the age of 22, I had the body of a pre-pubescent girl and I hated it. 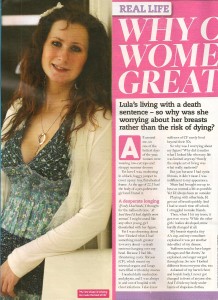 ‘If only I had boobs,’ I thought for the millionth time. ‘At least then I’d look slightly more normal.’ I might sound like any other young girl dissatisfied with her figure. Yet I was obsessing about how I looked when I had something much greater to worry about- a death sentence hanging over my head. Because I had life-threatening cystic fibrosis (CF), which meant my internal organs and lungs were filled with sticky mucus.

I needed daily medication and physio, and I was always in and out of hospital with chest infections. I also knew sufferers of CF rarely lived beyond their 30s. So why was I worrying about my figure? Why did it matter what I looked like when my life was limited anyway? Surely the simple act of living was what really mattered?

But just because I had cystic fibrosis, it didn’t mean I was indifferent to my appearance. Mum had brought me up to have as normal a life as possible. Yet I’d always been an outsider. Playing with other kids, I’d get out of breath quickly. And I had so much time off school, I struggled to make friends.

Then, when I hit my teens, it got worse. While the other girls’ bodies developed, mine hardly changed at all. My breasts stayed a tiny AA cup, and my consultant explained it was yet another side-effect of my disease.

‘Sufferers tend to have larger ribcages and flat chests,’ he explained, and anger surged through me. So now I looked different from everyone else, too. Ashamed of my barrel chest and boyish body, I never got changed in front of anyone else. And I’d hide my body under layers of shapeless clothes, wearing padded bras to give the illusion of curves. 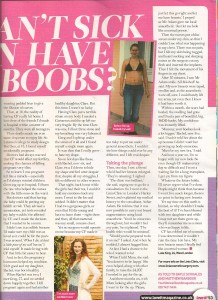 Then, at 16, the reality of CF really hit home. I lost three friends I’d made in hospital within a matter of months. They were all teenagers. Their deaths made me even more desperate to enjoy life. So I started college to study design. But then, at 18, I found myself accidently pregnant.

Doctors had always warned that CF would affect my fertility, making the chances of falling pregnant very slim. So to learn I was pregnant felt like a miracle- especially as I’d always wanted children. Growing up in hospital, I’d been the one who helped the nurses with the little ones on the ward.

But doctors said that having the baby could be putting my health at risk. They advised a termination, yet tests revealed my baby wouldn’t be affected by CF, and I made the decision that I wanted to be a mum. I didn’t see it as selfish because I’d make sure my child was as loved as it could be for the years I was around. ‘When I die, at least a little piece of me will live on,’ I told myself. It made living with CF that little bit easier to bear.

And, in fact, the pregnancy hormones helped my condition. I felt good and my daughter, Rachel, was born healthy. When Rachel was two, I met Greg, 27, and we settled down happily together. I fell pregnant again and had another healthy daughter, Clare. But this time, I wasn’t so lucky. Having Clare put a terrible strain on my body. I needed a Caesarean and the op left me very fragile. By the time Clare was one, I’d lost three stone and my breathing was very laboured.

Greg and I split up under the strain of it all and I found myself a single mum again. It was then that I really grew to hate my shape. So on hot days like these, with Rachel, now six, and Clare, two, I’d dress to hide my shape and feel utter despair that, despite all my struggles, I felt so different to other women.

That night, back home while the girls had their tea, I couldn’t hold my emotions back any more. I went to the loo and sobbed. It didn’t matter that I had two gorgeous girls, or even that I’d die young and have to leave them- right there and then, all that mattered was my small, concave chest. Yet no surgeon would operate on me because my CF made it too risky to put me under general anaesthetic. I couldn’t see how things could ever be any different, and I felt real despair.

Then, one day, I saw a friend who’d had her breasts enlarged. ‘They’re amazing,’ I sighed. ‘The clinic was brilliant,’ she said, urging me to go for a consultation. So I went to the Linia Clinic in London’s Harley Street, and explained my medical history to the consultant, Azhar Aslam. He told me that it was now possible to carry out breast augmentation using local anaesthetic. ‘You’d be conscious throughout, but wouldn’t feel any pain,’ he explained. ‘The health risks would be minimal.’

‘Would you be prepared to do it on me,’ I asked. And when he nodded, I almost hugged him. At last I had a chance to be who I wanted to be! When I told Mum, she said: ‘You deserve to be happy.’ She even helped, along with family, to raise the £4,000 I needed to pay for the op.

And three months on, with Mum looking after the girls, I went in for the op. ‘Please, just let this go right and let me have breasts,’ I prayed as Mr Aslam gave me local anaesthetic. ‘Just let me look like a normal person.’ Then the nurses put a blue screen under my chin, so that I couldn’t see what was happening to my chest. There was no pain, but I felt my skin being tugged, and heard sucking and slurping noises as the surgeon cut my flesh and inserted the implants. Then I felt the movement of his fingers in my chest.

After 30 minutes, I saw Mr Aslam smile. ‘All finished!’ he said. My new breasts were taped, swollen and, as the anaesthetic wore off, sore. I could barely lift my arms, yet even then I knew it had been worth it. Within a month, the scars had healed, the swelling gone and I had a pair of beautiful, big, 36DD boobs. My confidence was instantly lifted.

‘Mummy, your boobies look a lot bigger,’ Rachel, now five, said. I hadn’t told her about the op because I didn’t want her growing up body-conscious. ‘Must be my new bra,’ I said.

And now a year on, I’m so happy with my new look. So even though CF makes every day so difficult and I’m on the waiting list for a lung transplant, I get joy from my figure. Whatever the future holds, I’ll never regret what I’ve done. People might think that, because I won’t live much longer, there’s no point to having new breasts. Yet my time on this earth is limited, so why shouldn’t I make the best of it? I’ve been blessed with two daughters and while I may not see them grow up, they’ll remember me as a mum who was happy in life.

CF robbed me of so much. I was determined it wouldn’t ruin the time I do have. My new breasts mean I finally feel like a normal woman.